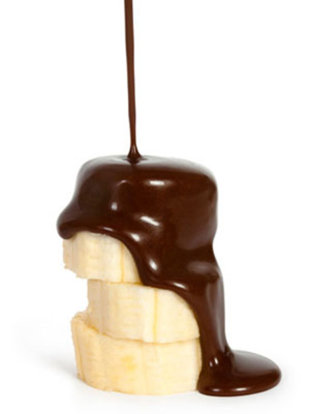 Mmm. Chocolate covered bananas…Don’t let desserts’ bad reputation discourage you. You can still get your sweet fix without undoing all the work you’ve been done at the gym. We tapped two health-minded chefs, Kendra Peterson of Drizzle Kitchen and Heather Crosby of Yum Universe, for eight low calorie dessert recipes that tally up to about 200 cals each.

1. Grilled Peaches with Honey and Greek Yogurt
Cut one semi-firm peach in half and remove the pit. Marinate in a half-cup of white wine with one teaspoon of dried thyme for 30 minutes. Remove and pat dry. Brush the cut side lightly with olive oil and place cut side on a hot grill (or under the broiler) for two to three minutes, flip to the other side and heat another two to three minutes. Place on a plate, and drizzle with one tablespoon honey. Spoon a quarter cup of two percent Greek yogurt over the top, and sprinkle with one tablespoon slivered toasted almonds.

2. Warm Blueberry-Ginger Parfait with Pistachios
Cook a half cup of fresh blueberries with one teaspoon freshly grated ginger and one tablespoon honey or maple syrup over low heat just until the blueberries start to pop. Spoon a quarter-cup of two percent Greek yogurt in a bowl and sprinkle very gently with orange blossom water. Pour the warm blueberry-ginger compote over the top, and sprinkle with one tablespoon of toasted crushed pistachios.

3. Frozen Chocolate-Chia Banana Bites
Cut one small banana into two-inch chunks. Meanwhile, melt two tablespoons of dark chocolate chips in a small ramekin (heat in microwave for a few 30-second intervals). Pour one tablespoon of chia seeds into another small bowl. Use a fork to grab one banana chunk, and dunk the bottom in the melted chocolate, then dunk in chia seeds. Place on parchment or wax paper. Continue with the remaining banana chunks and then pop into the freezer.

5. Nutty Chocolate “Milk Shake”
Cut a small banana into chunks and freeze. Place in the bowl of a small food processor, add a quarter cup of chilled unsweetened almond milk, one tablespoon sunflower seed butter, one teaspoon chia seeds and one to two teaspoons of cocoa powder. Blend until smooth and slurp down!

6. Cherry Vanilla Dairy-Free Soy-Free Ice Cream
Pit three cups of cherries. Place them, along with two teaspoons of lemon juice, two teaspoons of vanilla extra, fifteen pitted dates and one and a half cups of coconut milk with a pinch of tea salt into a blender and mix well. If you have an ice cream maker, chill the mix so it’s cold, and process in the ice cream maker according to manufacturer’s instructions. Freeze in a large, airtight glass container. No ice cream maker? Just pour into a large, airtight glass container and freeze. Thaw for about ten minutes before serving.

7. Baked Apples
Preheat oven to 350°F. Core and cut a red apple into thin slices. Place into a baking dish. In a blender or food processor, mix one tablespoon almond butter, a quarter teaspoon vanilla extract, one teaspoon cold-pressed coconut oil, a quarter teaspoon cinnamon, three tablespoons water, a pinch of nutmeg and an eighth of a teaspoon of sea salt until thoroughly creamy. Loosely fold in a tablespoon of dark or golden raisins into the sauce and combine with apples. Then sprinkle a teaspoon of shredded coconut, a tablespoon of gluten-free oats and two teaspoons of raw sunflower seeds on the apple mixture and bake for 45-60 minutes. Remove from oven, allow to cool and then sprinkle with chia seeds.

8. Naturally Sweetened Blueberry and Lime Granita
Wash six ounces of blueberries. Zest a teaspoon of lime. Place the blueberries and lime plus three pitted Medjool dates and a half cup of water in a blender and mix on high until very smooth. Pour in a glass bowl, cover and place in the freezer. After about one hour, use your fork to “grate” and break up the granita. Freeze a bit more, and repeat until you achieve the texture you’d like.